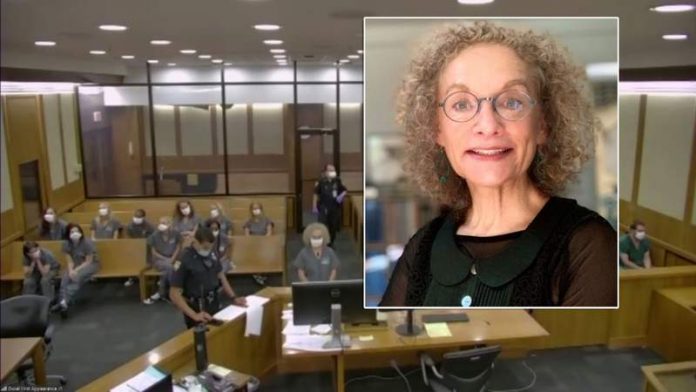 An English teacher Caroline Melanie Lee was named Teacher of the Year at Darnell-Cookman Middle/High in Jacksonville last Wednesday. On Friday she was arrested and is being charged with child abuse.

The arrest came after a student, a minor, not named in the report, claims  Lee allegedly hit her face causing a bloody nose.

The dispute started when it was announced that Lee was being named Teacher of the Year on the Duval County Public Schools’ Instagram account. Several comments appeared on the post. They were questioning her win. And also claiming she used the ‘n’ word while teaching. And alleging she has committed other microaggressions against students.

According to the Friday Duval Schools Police Report Lee responded to one of the comments. She explained that she used the ‘n’ word when reading ‘Of Mice and Men’ in the classroom.

Teachings of the 1937 classic novel have recently come under fire. And school districts are questioning how to ethically teach readings with terms and phrases that are no longer acceptable.

The original Instagram post congratulating the Teacher of the Year and all the comments have been deleted.

Lee asked to speak with the student who she had been commenting to on Instagram. According to the police report, the student was not in any of Lee’s classes this year.

The student reported that when she sat down, Lee reached across the table and struck her several times. Which caused a nosebleed.

The  student told police: Lee “reached across the table and struck her on her face with the heel of her palm.” The student “stated she grabbed her nose because it started bleeding after she was struck.” The student “stated Lee then began repeatedly calling her a ‘f****** b****’ as she landed several more strikes on the top of head.”

The student “stated she began trying to hold both of Lee’s arms to keep from being struck and Lee kicked her on her lower leg.”

Lee denies she hurt the student. In the arrest report, the officer wrote that Lee acknowledged the conflict was the student’s word against her own.

The teacher says she wanted to talk to the student, after seeing a message on Instagram she thought was “a threat to kill her.” But, added, she was “not afraid”  but concerned. And “did not feel the need” to report the message to the school administration.

Lee told police, according to the report, that she left her door open when the student was in her classroom. But police said another student, who was decorating Lee’s classroom door that morning, said Lee asked him to leave. And then she closed the door behind him. The student also reported hearing the teacher raise her voice.

Lee was arrested that morning after the officer spoke with the student victim, Lee, and four witnesses. No one else was inside the classroom with Lee and the student, but there were witnesses in the hallway.

Principal Tyrus Lyles is in contact with the student’s family.

“It is very disappointing, but I am compelled to share with you that one of our teachers was arrested today on campus for child abuse,” Lyles said. “Even more disappointing, the teacher arrested is our recent teacher of the year nominee.”

“What is alleged should never occur—ever—especially in a school setting,” she said. “I have no tolerance for adults who harm children, especially adults in a position of trust. We will cooperate with all investigations, and pending those results, we will take the actions necessary to stand up for and protect our students.”

Lee is not allowed in the classroom. And she cannot return until all judicial and internal procedures are done, the principal said.

Lee now faces charges of child abuse against a student. She appeared before a judge Saturday morning and was released without bail.

Child abuse is a felony in Florida.