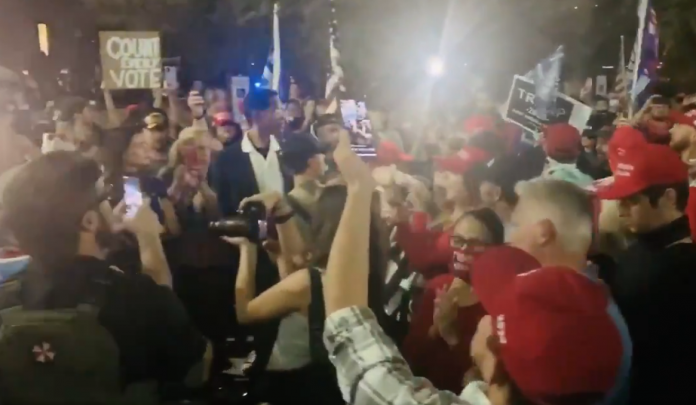 Arizona is a critical battleground state for either Trump or Biden to clinch the presidency. The former vice president holds a slim lead in the state. Therefore, the president and his supporters believe the state is still in play.

It is interesting to note that Trump supporters are demanding that election officials must count every ballot, which is in contrast with the president’s legal actions in other battleground states including Pennsylvania, Michigan, and Nevada where he demanded: “stop the count.”

Trump supporters started their protest at the ballot counting center in Phoenix late Wednesday night in response to Fox News’ projection in favor of Biden while other TV networks are saying that the presidential race in the state is too close to call, thus it is necessary to wait for election officials to finish counting all the ballots.uring the protest,

Republican Cong. Paul Gozar, a strong supporter of the president led the demonstrations on Wednesday night. He said told the crowd, “We’re not going to let this election be stolen, period.”

He also declared to National File that he and his fellow Trump supporters “will not allow Biden and his thugs to steal the election.”

Gozar also tweeted that patriots seek justice and urging people to not allow the president’s opponents their votes.

In a statement, two top officials—one Democrat and one Republican— in Maricopa County expressed concern about the spread of misinformation regarding the integrity of the election process.

“Everyone should want all the votes to be counted, whether they were mailed or cast in person. An accurate vote takes time … This is evidence of democracy, not fraud,” according to the Republican chair of the Maricopa County board of supervisors Clint Hickman and Democratic supervisor Steve Gallardo.