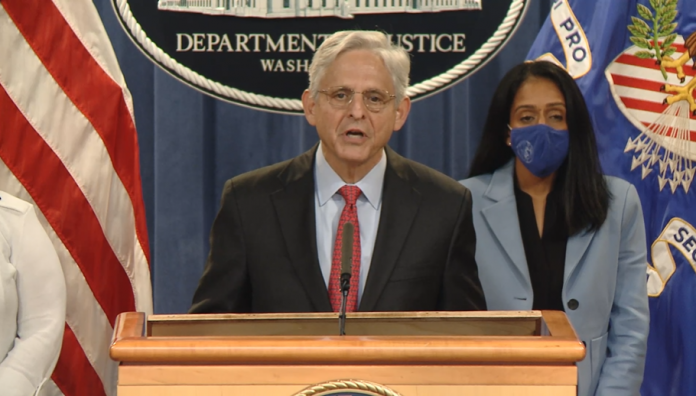 The Texas abortion law known as the Heartbeat Act/Senate Bill 8  or SB 8 is the most restrictive across the United States. This law prohibits abortion on a pregnant woman if a physician detects a fetal heartbeat, which can be as early as six weeks into the pregnancy.

In his remarks, AG Garland noted that the Texas abortion law is very restrictive. He said, “SB8 bans nearly all abortions in the state after six weeks of pregnancy – before many women even know they are pregnant and months before a pregnancy is viable. It does so even in cases of rape, sexual abuse, or incest. And it further prohibits any effort to aid the doctors who provide pre-viability abortions or the women who seek them.”

Texas abortion law is a ” statutory scheme to nullify” the U.S. Constitution

“Instead, the statute includes an unprecedented scheme to, in the Chief Justice’s words, “insulate the State from responsibility,” according to AG Garland.

Furthermore, the U.S. Attorney General pointed out that Texas’ obvious intention in its “statutory scheme to prevent women from exercising their constitutional rights by thwarting judicial review for as long as possible.”

“This kind of scheme to nullify the Constitution of the United States is one that all Americans – whatever their politics or party – should fear. If it prevails, it may become a model for action in other areas, by other states, and with respect to other constitutional rights and judicial precedents,” said AG Garland.

He said the Justice Department filed the lawsuit to fulfill its duty to defend the Constitution of the United States and to uphold the rule of law.

Watch the DOJ press conference below:

The DOJ’s action comes a week after the Supreme Court refused to grant an injunction to stop the enforcement of the Texas abortion law.

The five most conservative Justices Clarence Thomas, Samuel Alito Jr., Neil Gorsuch, Brett Kavanaugh, and Amy Coney Barrettt allowed the state law to stand citing the reason that the sole private-citizen respondent in the case submitted an affidavit that currently, he has no intention to enforce the law.

The five conservative Justices also noted that Texas “has represented that neither it nor its executive employees possess the authority to enforce” SB 8.

However, Chief Justice John Roberts Jr. together with liberal Justices Stephen Breyer, Sonia Sotomayor, and Elena Kagan said they would block the Texas abortion law to preserve the status quo while the courts weigh its legality.