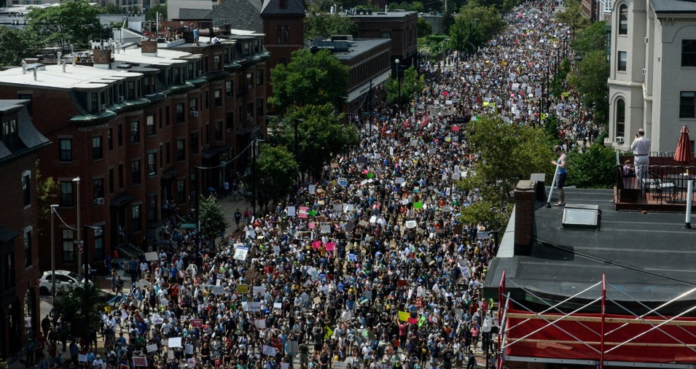 With every passing day, the [Alt] Left becomes more and more radically unhinged. Yesterday, they took to the streets in Boston to protest against a free speech event, as reported by The Atlantic.

The most ironic factor of the Alt Left protesting against free speech is that free speech grants them the rights to protest against it. However, in the minds of the protesters, free speech engendered the horrific events in Charlottesville. Additionally, advocates and opposers of free speech need to understand a few things.

First and foremost, the existence of free speech does not absolve anyone of criticism or social consequences. This means that if your employer sees you holding a lit torch and chanting “Jews will not replace us” at a KKK rally, you could get fired. However, being against hatred is not a reason to oppose all free speech. The opposition of free speech is an incredibly dangerous slippery slope. Furthermore, who decides what speech is “hateful” or free? Technically, any statement that people disagree might be “hate speech.”

The Importance of the First Amendment

One of the greatest tragedies of the Boston protesters is their flagrant ignorance. For starters, they have no understanding of why the first amendment is so meaningful. Censoring controversial, or even hateful, speech is not the answer. Also, living in a society where the government has the power to determine what people can say or not is dangerous. The exchange of ideas generates growth, conversation, and value. To place a halt on free speech because of a small group of extremists is silly and unacceptable.

In addition to allowing a healthy exchange of ideas, freedom of speech allows people to articulate issues that matter to them. This sentiment should, ironically, be understood by the Boston protesters.

A ban on free speech directly violates the Constitution. This nation’s laws are paramount to who we ar. What happens when the first amendment dies? Will the right to bear arms be next? Who enforces the ban on free speech? Will it truly be worth it in the end?

These are all questions that the [Alt] Left must ask themselves. Protesting against free speech is easy when you have the right to speak freely. What happens when that right is revoked? Quite frankly, the [Alt] Left should be careful what they wish for. They might get what they are asking for and then realize it is not what they wanted. By that point, it will most likely be too late.