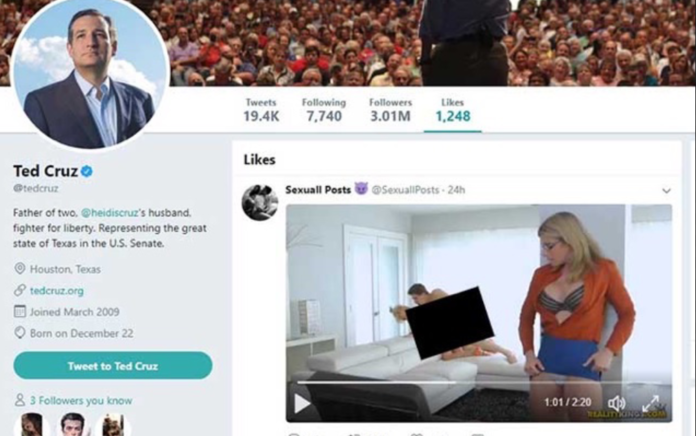 On Monday night, Texas Senator Ted Cruz’s official account “liked” a social media post featuring three people in a sexual situation. As reported by CNN, the liked video was on a Twitter page called “Sexuall Posts.” Furthermore, the footage contained a man and a woman engaging in sexual acts with another woman watching from afar and touching herself.

First and foremost, two elements about the “liked” tweet intrigue the majority of Americans. One, Senator Cruz has yet to come out and outright deny that he himself is responsible for liking the tweet. Secondly, Cruz is a staunchly conservative politician who frequently presents himself as a ‘family values’ man. The pornographic footage is about as far away from family values as one can possible get.

The liking of the aforementioned tweet is not really a scandal. Twitter users had a good laugh over the situation and a few people used the imagery to create memes. The contrast between the liked tweet’s footage and the values Senator Cruz claims to uphold surprised many people. However, this story will likely blow over within a few weeks and people will converse about other matters.

Despite the hilarity of Cruz’s liked tweet, Americans really do have much more pressing matters to concern ourselves with. The Washington Establishment appears determined to sabotage the Trump Presidency. Very recently, people learned of Speaker Ryan’s past comments which cast doubt on the creation of a Southern border wall. Likewise, the fate of DACA and allowance of illegal immigrants appears to hang in the balance. Some Americans recently theorized that President Trump either supports amnesty or is being pushed in that direction.

Quite frankly, whether or not Senator Cruz or one of his staff members “liked” the ‘Sexuall Posts” tweets is irrelevant. Although Cruz has yet to deny liking the tweet himself, even if he did, who really cares? Whatever he does or does not do relating to viewing pornography in his spare time is pretty meaningless in the grand scheme of politics. However, the situation certainly makes for a good laugh. Perhaps Senator Cruz—or his staffers—will be more careful in the future before pressing the “like” button.