The U.S. Customs and Border Protection (CBP) mistakenly seized what they thought were “2,000 counterfeit Apple Airpod Earbuds.” In reality, they weren’t fakes. They were genuine OnePlus Buds.

CPB agents seized the items at an air cargo facility in New York, at the John F. Kennedy International Airport on August 31. The shipment originated from Hong Kong and headed to Nevada.

The New York CBP  announced the seizure on Friday and tweeted photos of the packaging and the “counterfeit” pods.

Within hours the tech community was pointing out that the packaging and OnePlus buds were real. C/net and TechCrunch reported on the mistake Saturday.

Based on the agency’s photos, the seized items appear to be legitimate OnePlus Buds, being transported in standard, clearly marked packaging. It’s not certain if all of the 2,000 seized units were OnePlus Buds, we only have the CBP photo of one real package.

OnePlus Buds do look similar to AirPods. But the packaging is identifiable and in English.

These are android earbuds and to access all of the added controls and benefits, they only work with OnePlus smartphones.

The CBP press release also claimed that if the merchandise had been “real” the “Manufacturer’s Suggested Retail Price (MSRP) would have been $398,000.” And this math doesn’t add up. OnePlus Buds retail for $79 each and if there were 2000 seized the MSRP would have been $158,000.

“CBP officers are protecting the American public from various dangers on a daily basis,” said Troy Miller, Director of CBP’s New York Field Operations. “The interception of these counterfeit earbuds is a direct reflection of the vigilance and commitment to mission success by our CBP Officers daily,” he added.

The CBP tweeted the obvious “THAT’S NOT AN APPLE”

Twitter users are having a lot of fun comparing the similarities of the products and explaining that counterfeit items are not usually available in legitimate packaging.

OnePlus USA replied to the CBP tweet with, “Hey, give those back!”

It is uncertain if the seized OnePlus Buds will be returned to their owner or if the retailer knows what happened to the shipment.

Nationwide in 2019, the CBP seized 27,599 shipments containing goods that violated intellectual property rights (IPR). The total estimated MSRP was $1.5 billion if the goods had been genuine.

The CBP also seize tons of illegal drugs and thousands of fake driver’s licenses every year. 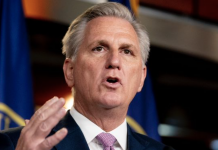