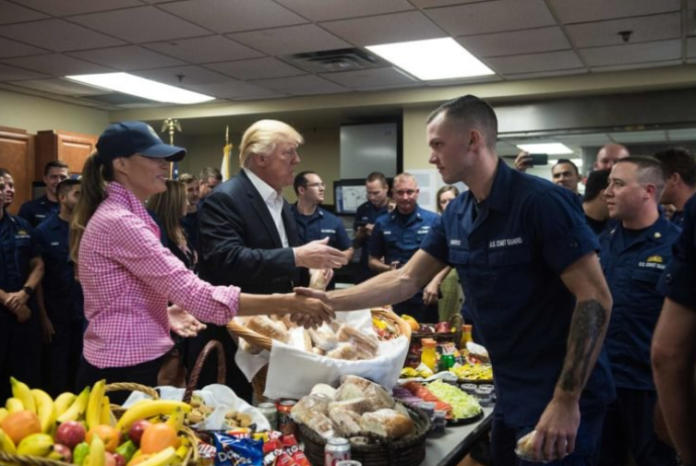 The First Family and Armed Forces

The President and First Lady traveled to Coast Guard Station Lake Worth Inlet on Thanksgiving Day. They then served fruit, sandwiches, muffins, cookies, and beverages to Armed Forces members and thanked them for their service.

President Trump also delivered remarks to active members of the Armed Forces. They can be viewed in full here.

“There is no brand, of any kind — I’m not just talking about a military brand — that has gone up more than the Coast Guard. Incredible people. You’ve done an incredible job. And I love coming in here and doing this with you today.”

“You saved a lot of people. And I just want to thank you on behalf of the whole country and on behalf of us. What a job you’ve done, and thank you all very much. And Ill also take questions if you have them.”

Additional Remarks from the President

President Trump then discussed some of the progress he’s made during his time in office:

“The country is doing really well. Stock market, all-time high. This is all good stuff. I just spoke to a lot of your friends in Afghanistan and in Iraq. We spoke to the USS Monterey — great ship, great missile ship. We spoke to a lot of different folks from the Air Force, the Army — just now, a little while ago at Mar-a-Lago.”

“We’ve cut back so much on regulation and all the waste, and all the abuse. And the stock market on Friday hit an all-time high. The highest its ever been, ever.”

“Your whole, long life, the stock market is higher than its ever been. And that means your 401(k), all of the things that you have, whether its — even if you’re in the military, you have a country that’s really starting to turn.“