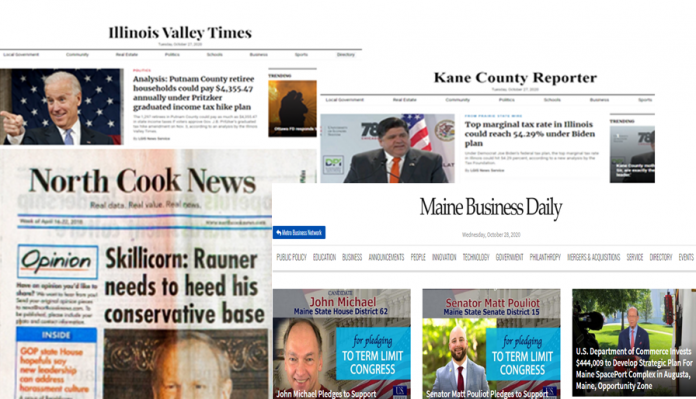 Portraying itself as a local news site in Maine, an online publication is reportedly a part of a pay-for-play network of websites putting out stories on commission and has failed to disclose ties to political campaigners and propagandists.

Online publication Maine Business Daily was at the center of a recent New York Times story that chronicled the editorial processes and operations of the pay-for-play network of more than 1,300 websites that look like state or local news but publish articles ordered and even paid for by conservative think tanks, political operatives, corporate executives.

Citing an Aug. 2019 story in Maine Business Daily, the New York Times reported that the story was influenced by a Republican operative who pushed the publication to write a one-sided article quoting a spokesman for the campaign of Republican U.S. Senator Susan Collins and taking a swipe at Sara Gideon, her Democratic opponent.

The report comes on the heels of campaign heat in the United States, with both parties splurging millions of dollars into publishing digital stories sometimes presented as news reports in a bid to influence the 2020 elections, the newspaper reported.

It also noted the company seeks to fill a void left by vanishing local newspapers across the country. However, the network, which is currently present in 50 states, is “built not on traditional journalism but on propaganda ordered up by dozens of conservative think tanks, political operatives, corporate executives and public relations professionals.”

Apart from Maine, other areas have also seen a spike in partisan news sites in recent years, including the progressive Maine Beacon and the conservative Maine Examiner.

‘A key source of information about our state’s business climate’

In a short statement on its website, Maine Business Daily states: “Our mission is to be a key source of information about our state’s business climate, daily business transactions, and entrepreneurship. We also provide important data and facts about the state’s economy to improve discussion among policymakers, business leaders, and the public.”

The online site, however, does not provide a list of its correspondents and news editors on its “About page.” Many of its stories are also labeled as press release reports.