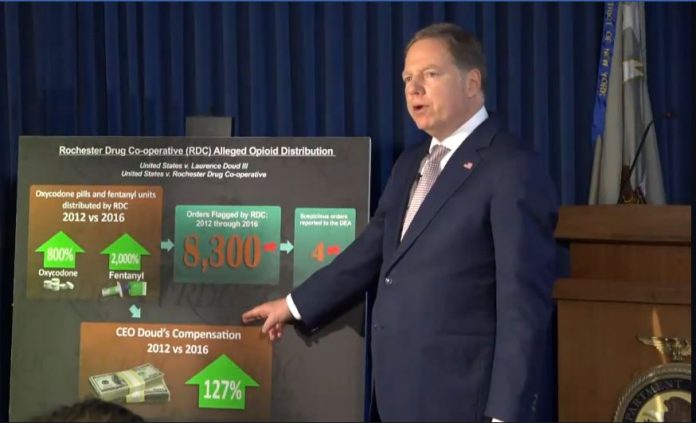 Rochester Drug Co-Operative, one of the ten largest pharmaceutical distributors in the United States, agreed to pay $20 million in penalty to settle the criminal charges against it.

Under the settlement, Rochester Drug Co-Operative also agreed to accept responsibility for its conduct.  Additionally, the New York based pharmaceutical distributor agreed to change and improve policies to comply with the Controlled Substance Act and submit to supervision by an independent monitor.

The federal government agreed to defer prosecution for a period of five years assuming Rochester Drug Co-Operative’s continued compliance with the settlement.

In a statement, the pharmaceutical distributor said it will pay the $20 million penalty over a five-year period. Its new management team is making significant changes focused on compliance.

Its spokesman Jeff Eller said, “We made mistakes…and understands that these
mistakes, directed by former management, have serious consequences. We accept responsibility for those mistakes…Not only do we pledge to honor the letter and spirit of these agreements, we are also putting into place a world-class compliance program.”

The pharmaceutical distributor and its former top executives allegedly committed illegal distribution of controlled substances including the opioids oxycodone and fentanyl.

In addition, the defendants allegedly conspired to defraud the U.S. Department of Drug Enforcement Administration (DEA). Furthermore, the pharmaceutical distributor allegedly intentionally chose not to comply with its legal obligation to report thousands of suspicious orders of controlled substances to the DEA.

Criminal charges “should send shock waves throughout the pharmaceutical industry”

Geoffrey S. Berman, the U.S. Attorney for the Southern District of New York, said, “This prosecution is the first of its kind:  executives of a pharmaceutical distributor and the distributor itself have been charged with drug trafficking, trafficking the same drugs that are fueling the opioid epidemic that is ravaging this country.  Our Office will do everything in its power to combat this epidemic, from street-level dealers to the executives who illegally distribute drugs from their boardrooms.”

On the other hand, DEA Special Agent in Charge Ray Donovan, commented, “Today’s charges should send shock waves throughout the pharmaceutical industry reminding them of their role as gatekeepers of prescription medication.  The distribution of life-saving medication is paramount to public health; similarly, so is identifying rogue members of the pharmaceutical and medical fields whose diversion contributes to the record-breaking drug overdoses in America.”