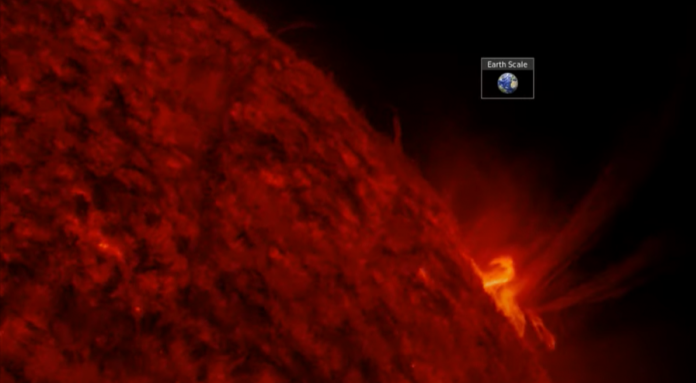 A solar storm hits Earth today and tomorrow. The enormous solar flare has the potential to disrupt power grids, cause internet outages, and impact low-Earth orbiters. And it is already making the northern lights visible in New York, Wisconsin, and Washington State. And as far South as England, Scotland, and Ireland.

The National Oceanic and Atmospheric Administration (NOAA)  issued a G2, or moderate, geomagnetic storm watch “due to the anticipated arrival of a CME (coronal mass ejection).”

Scientists are doing ongoing analysis of the event which started midday on October 11th and expects lingering effects to persist into October 13th. Most recently the Earth experienced a solar flare on July 3rd.

But the most spectacular outcome of the massive CME could be the aurora borealis, also known as the northern lights that are normally visible in the high-latitude regions of Earth, but “maybe visible as low as New York to Wisconsin to Washington state,” the advisory says.

The ethereal waves of color, the northern lights, appear when energized particles from the sun strike the planet’s upper atmosphere at astronomical speeds of up to 45 million mph, according to Space.com.

A privilege to be in Longyearbyen with the hardest working news team in the Arctic: producer @Nflwright; camera & edit @simonitn. pic.twitter.com/FeBDmSAkON

The Sky news site reported that “As Earth’s magnetic field redirects the particles toward the North Pole, the dramatic process transforms into a cinematic atmospheric phenomenon that dazzles and fascinates scientists and skywatchers alike.”

Usually, we are protected from the sun’s radiation thanks to our ionosphere. It serves as Earth’s magnetic shield to deflect much of the heat and light. But sometimes, solar storms can penetrate the shield. And that results in problems with anything powered by electromagnetism.

During the next 24 to 48 hours it is expected that on Earth we will be experiencing a dramatic increase in solar activity. There are several classes of solar flares, with X-class considered the most intense. The one observed Saturday was an M-class event, the second-strongest.

Most of the time, we’re protected from the sun’s radiation thanks to the ionosphere. Earth’s magnetic shield deflects much of the heat and light. But sometimes, solar flares can penetrate the shield. And that results in problems with anything powered by electromagnetism.

Scientists and astronomers are not expecting the flare to result in anything like we got in September 1859. The Carrington Event is the largest geomagnetic storm on record. It has been categorized as an X-class event.

That storm filled the skies with auroras even close to the equator. And it inflicted serious damage to telegraph systems across the globe.