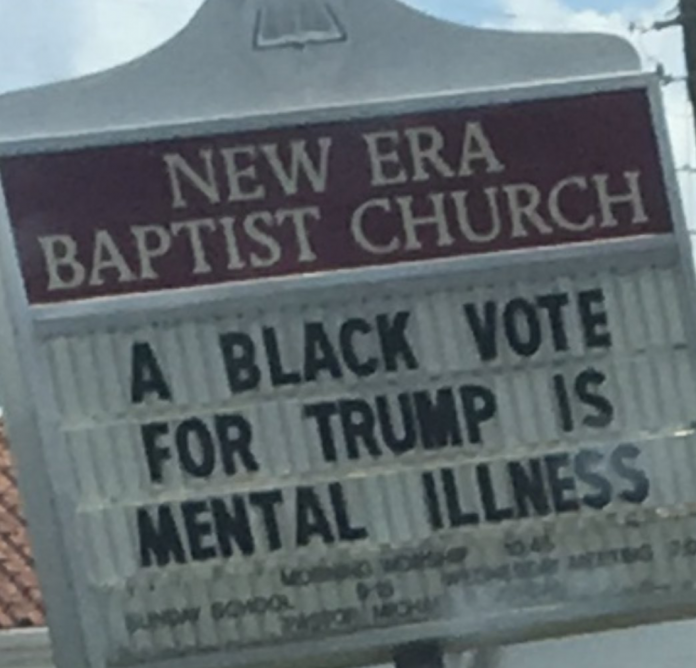 Many Americans who take issue with President Trump also have no qualms with expressing their distaste for Trump voters and Trump supporters. Since the president’s time in office, various conservatives and MAGA-hat wearers have faced public ridicule and condemnation. Various left-wing media outlets, such as The Young Turks, also haven’t provided very favorable coverage of Americans who back this current president.

A church based in Birmingham, Alabama is presently facing some heat following a controversial message. A sign displayed outside of the New Era Baptist Church states that “a black vote for Trump is a mental illness.” This particular manner of thinking is not exactly new for many individuals who lean left of center.

Individuals who lean left of center are often taken aback when black Americans support or vote for the president. Although Trump continously faces accusations of racism from his critics, not everyone shares the same outlook. Certain people in this country believe that claims of racism are politically weaponized and politically motivated. Furthermore, the president has repeatedly affirmed that he is not a racist.

Reportedly, this is from a church in Birmingham with a “A BLACK VOTE FOR TRUMP IS A MENTAL ILLNESS”… pic.twitter.com/SQzkzXXfuw

Pastor Michael R. Jordan presently heads the New Era Baptist Church. This particular church has displayed other questionable messages in previous times. In 2018, a sign promoted by the church stated, “black folks need to stay out of white churches.” The other side of the sign also read, “white folks refused to be our neighbors.”

Following controversy regarding this sign, Jordan doubled down. His statement on the matter read as follows:

“White folk have proved they don’t want to live next door to us, or be our neighbors, or worship with us. Now they want to plant a white church in a black neighborhood under the umbrella of supposedly to fight crime. The white church elected a racist president Donald Trump.”

Do All Black Americans Have to Think the Same Way?

To many people, the notion that black Americans cannot vote for or support Trump contains monolithic undertones. In layman’s terms, it suggests that all black Americans must think the same way…at least politically. This is something which various groups tend to push back against…especially black Americans who support and/or voted for President Trump.