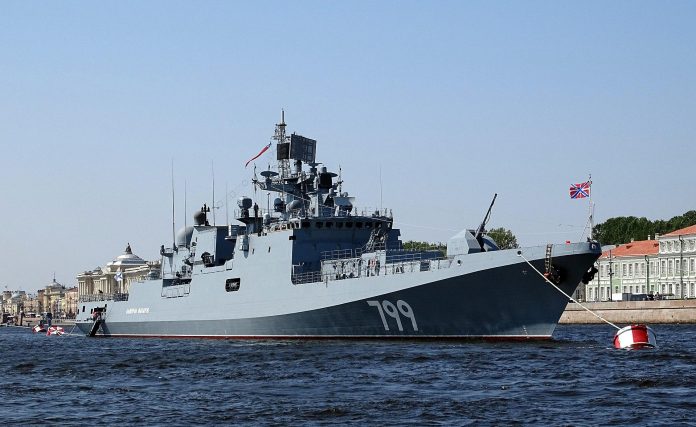 UNIAN news reports that the vessel was a “burevestnik” frigate named The Admiral Makarov. There were also reports that “large numbers” of Russian aircraft were circling overhead the smoking ship.

The Kyiv Post reported that Ukrainian military and Ukraine Parliament member Oleksiy Goncharenko have confirmed the ship had been hit. But the extent of damage is still unknown.

Open-source flight monitors on Twitter show data gathered from satellites and transponders reveal that known Russian rescue vessels and aircraft headed to the Snake Island area after reports emerged that the Makarov had been attacked.

It’s seeming more and more likely that the Claims about the Russian Frigate Admiral Makarov being stuck by Ukrainian Anti-Ship Missiles off the Coast of Odessa is True, multiple Rescue Ships and Aircraft are reportedly in the Area with U.S Surveillance Drones keeping eyes on it. pic.twitter.com/JTuAKr1VEd

Still unconfirmed images of a Russian warship said to be the Makarov burning were circulating on social media.

The Admiral Makarov was commissioned in 2017, making it one of the newer ships. And it has been described as the most powerful Russian warship in the Black Sea today. Two large frigate class ships are also in the area. And both the “Admiral Grigorovich” and “Admiral Essen” are in the area.