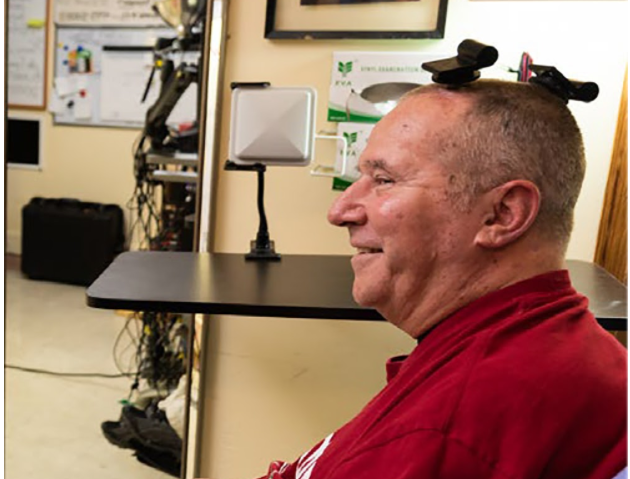 The first wireless brain-computer interface (BCI) implanted in humans is being tested. Brown University has a licensing agreement with Blackrock Microsystems to make the device available to neuroscience researchers globally.  Tests are being performed at the Providence Veterans Affairs Medical Center. The BrainGate team is using the device in ongoing clinical trials.

Texas-based company Neuralink, owned by Elon Musk, recently implanted a BCI in a monkey. The Neuralink BCI has not been tested on humans. But the monkey was able to play pong using its brain for remote control.

The assistive technology enables people with paralysis to communicate on computer screens. It also helps them control robotic prostheses with their minds. The technology is being refined to allows paralyzed people to walk again. And just like the Neuralink monkey people use their minds and to communicate with computers.

The data is showing the wireless system transmits signals with virtually the same fidelity as wired systems, and participants have similar point-and-click accuracy and movement speeds.

For eight years, clinical trials were using BCIs that needed cables to connect the sensing array in the brain to operate the external devices. In the most recent round of studies, the system is able to transmit brain signals without the physical tethering to a de-coding system.

The BCI used in the study was first developed at Brown in the lab of Arto Nurmikko, a professor in Brown’s School of Engineering.

The transmitters are approximately 2 inches. And they weigh a little over 1.5 ounces. The unit sits on top of a user’s head. And it connects to an electrode array within the brain’s motor cortex. It uses the same port previously used by wired systems.

The Nueralink BCI is totally implanted as a computer chip. The Braingate  Brown Wireless Device (BWD), is attached to the top of the head. The BWD transmits high-fidelity signals while drawing low power. Two linked devices recorded neural signals at 48 megabits per second from 200 electrodes. The battery life is over 36 hours.

The latest Braingate study demonstrates new possibilities for trial participants with paralysis. The participants, a 35-year-old man, and a 63-year-old man were using the system in their homes.

“I am privileged to be part of a team pushing the frontiers of brain-machine interfaces for human use,” Nurmikko says. “Importantly, the wireless technology described in our paper has helped us to gain crucial insight for the road ahead in pursuit of next generation of neurotechnologies, such as fully implanted high-density wireless electronic interfaces for the brain.”