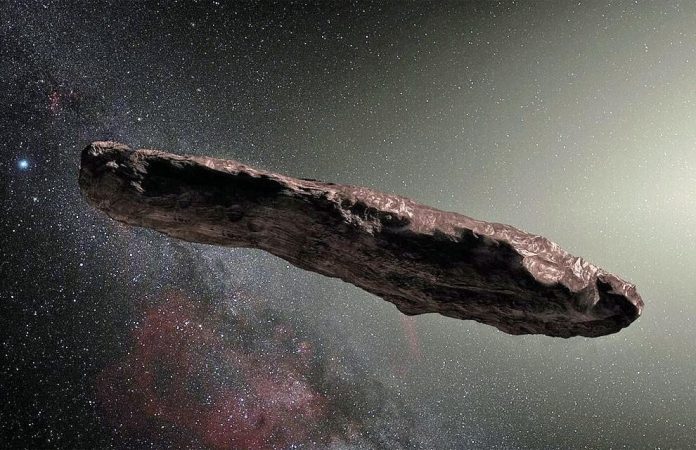 Israeli-American Astrophysicist Avi Loeb claims that alien technology has already been here. And using Harvard’s  Galileo Project initiative he is searching the skies for its return. Loeb joins NASA, the international astronomy community, and the U.S. government looking for evidence of alien technology.

The U.S.-funded Unidentified Aerial Phenomenon Task Force (UAPTF) released a report in June.  And it was not able to confirm alien life, but it did not rule it out, either. The US intelligence report confirmed more than 100 UAP/UFO unexplained sightings since 2004.

Loeb believes that the sighting of Oumuamua, “could be a piece of alien technology.” Or as possibly a “defunct solar sail.”  And that’s when interstellar objects, UFO’s and UAP’s got on Loeb and Harvards’ radar.

The space rock was spotted by the  Panoramic Survey Telescope and Rapid Response System located at Haleakala Observatory, Hawaii, US. The Pan-STARRS telescope caught the object when it was already heading out of our solar system.

Loeb describes the actions and appearance of the wayward object, as puzzling.

Its speed and trajectory proved it was not native to the Earth. No current spacecraft moves that fast. And it was too far away for scientists to analyze it properly.

Loeb says that ʻOumuamua isn’t shaped like the other chunks of rock we see floating around the solar system. It’s either a rod or pancake shape, either of which would be pretty odd. It also appeared to be tumbling with uneven rotational periods. Perhaps most perplexing is the small but detectable acceleration as it spun off into space.”

ʻOumuamua started all this, but sadly, we will probably never know what it really was,” he adds.

A group of private donors is funding the Galileo Project with about $1.75 million. The Project will rely on a network of telescopes and astronomical survey data to search for evidence of “extraterrestrial technological civilizations” (ETCs).

Loeb describes it as a joint effort with the Search for Extraterrestrial Intelligence (SETI) which uses radio telescopes to look for alien life. And he speculates that UFOs/UAPs could be alien technology, as well.

The Project will also use Artificial Intelligence (AI) to aid their search. The team plans to develop algorithms for data scans from various telescopes. The group will also use data from existing and future astronomical surveys. The goal is  “to discover and monitor the properties of interstellar visitors to the solar system.”

Loeb believes that this is the time for developing and fine-tuning extraterrestrial technology.

“Science should not reject potential extraterrestrial explanations because of social stigma or cultural preferences that are not conducive to the scientific method of unbiased, empirical inquiry. We now must ‘dare to look through new telescopes,’ both literally and figuratively.”

“The mission to find ETCs may be a long shot, but the project could still generate new data on interstellar objects. with the hope that one of them will be indisputably alien in origin,” he said.